Also known as SCCExposed, this website was created in 2016 out of necessity and as a last resort to achieve justice and seek reform and enforcement of the law through the court of public opinion, after all legal channels, authority and and institutions in Santa Clara County failed to do so. It is very sad to write that since its publishing not much has changed at the County level.

While some of the scandals involving Santa Clara County's government are sometimes published on the local news media, most of the abuses go largely undetected, unnoticed due two main reasons: People are afraid to speak up, for those who dare to do so are labeled as crazy, incompetent, vexatious, and chaotic. Their life and personal image is systematically tarnished and destroyed, along with their credibility and professional image. In many cases, even the family members and loved ones of those outspoken individuals are bullied by our local government officials, thus, intimidating many of these people to become silent.

Two years following its launch, SCCExposed is now being updated and renovated to include evidence and reporting of official misconduct happening across Santa Clara County's government. Along with a personal blog by one of the many victims of government corruption and bullying, SCCExposed is also publishing information from other sources and individuals also fighting for justice. This website includes links and articles previously published in the local news media.

Granted by the Constitution of the United States of America, SCCExposed honors the sacrifice of many brave women and men who have fought for our freedom by exercising  freedom of speech and presenting factual information that Santa Clara County residents ought to know.

In advance, SCCExposed wants to express to you its profound gratitude for taking the time to read and explore its contents. While many reports you will find shocking and appalling, you will also learn how to help SCCExposed and those fighting for justice, accountability and transparency in our local government.

If you or anyone you know has been victim of corruption and abuse of power in Santa Clara County, please know that you are not alone.

If you or anyone you know have reported abuse of power to the authorities and our elected officials have done nothing, please contact SCCExposed, who wants to hear your story and give you a voice.

If you find the information on this website disturbing and the abuses and corruption herein exposed unacceptable, join SCCExposed. Together we can force and bring government accountability and transparency to our local government.

As long as we remain silent, government bullies and corruption will thrive and prevail.

Your Vote is Your Voice

A powerful and eloquent speech to remind us all that our voice is our vote, our power is our vote.

We have a problem when the priorities of our elected officials fail to reflect the needs of the people who put them in power. In Santa Clara County the Board of Supervisors has failed children, seniors and the most vulnerable of our population by misusing and wasting millions of tax dollars to pay lawsuits against the County in order to protect incompetence, abuse, and corruption while neglecting for years the needs of children, seniors, and women in this County.

Enough is enough. Years of track record of abuse and neglect speak louder than false promises. It is time to reclaim a transparent, ethical, and accountable government through electing candidates who with their actions demonstrate their
care and true desire to serve our community, not their own personal self-serving political agenda. 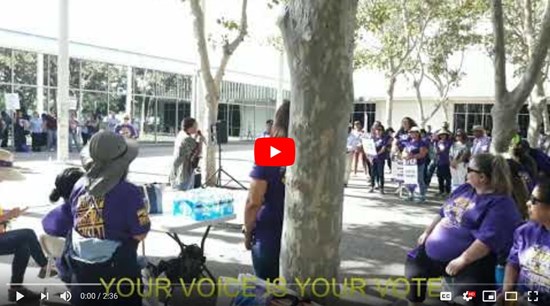 This is the reality that many seniors and the disabled experience in Santa Clara County.

The County Board of Supervisors are well aware of the failure of James Ramoni and Robert Menicocci to deliver quality care and services to seniors in their care. SSA and DAAS leaders' neglect and incompetence is hurting the most vulnerable.

In the private sector these individuals would have been fired long time ago. Why is the County of Santa Clara allowing these individuals to operate with impunity and break the law? It is beyond my understanding.

These people must be investigated and prosecuted to the full extent of the law.

When it comes to laws that protect workers, the public, and the integrity of the system, Santa Clara County is a pioneer. Just look at the County Charter, Merit System Rules, and the progressive County mission and core value statement in the County’s official website.

Given these progressive laws and regulations, why then, there is a crisis of corruption happening for many years in Santa Clara County?

From citizens concerns being ignored, to independent journalists being silenced and prosecuted for exposing County corruption, to County employees frustrated over the abuses, bullying, and intimidation they have endured for years at the hands of the County, and to taxpayers footing the bill due to the many lawsuits against the County due to corruption, incompetence, abuses, and unjustified firing of government whistleblowers, one may ask why does the County insist that this corrupt culture must be protected and celebrated?

Editorial: Why Labor Unions Must Re-Evaluate Their Political Support

Thoughts and truths about "Labor Friendly Candidates," and why labor unions must re-evalute their support of such candidates whose lack of actions speak higher than any pretty and empty words they have for years spoken to union workers...

Your Vote is Your Voice

Editorial: Why Labor Unions Must Re-Evaluate Their Political Support